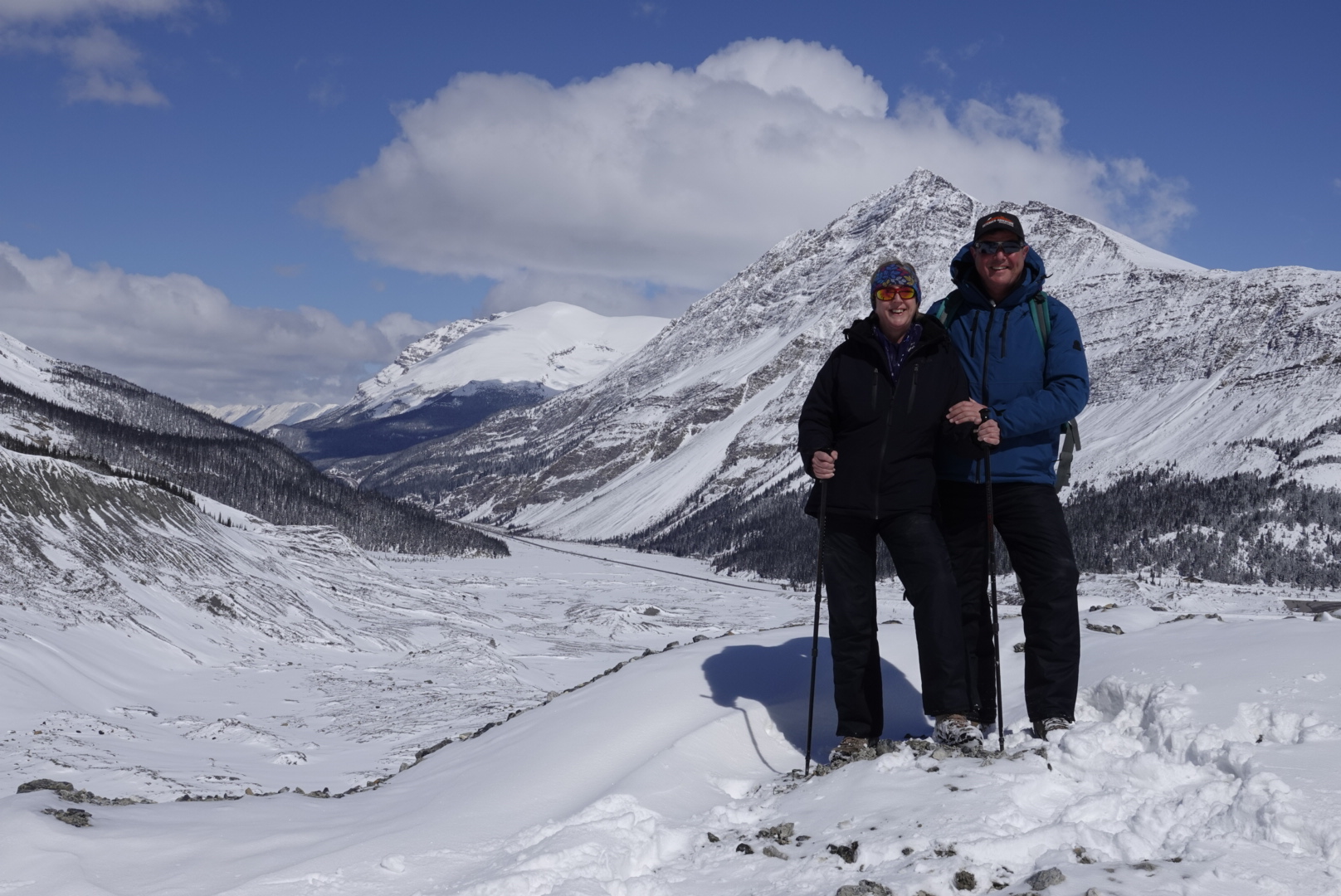 Icefield Parkway is the name of the road that runs between the towns of Lake Louise and Jasper and on the day we left Canmore it lived up to it’s name – it had snowed heavily overnight and it was bitter cold.

The road was a combination of ice and snow and our windscreen wipers kept freezing up. Luckily I knew someone who could help with that!

To give you an idea of just how cold it was take a look at the wheel of the RV that we parked beside at our overnight stop.

It was a shame really because the Icefield Parkway is rated as one of the most scenic drives in the world, and bears are often seen from the road, but on the day we travelled the first half of it we were lucky to see to the end of our bonnet at times.

We woke up to a much better day the following morning and realised what a beautiful setting we had stayed in.

Continuing up the Icefield Parkway towards the town of Jasper we stopped at the Columbia Icefield Station where it is possible to take an “ice crawler’, a monster of a truck, out onto the Athabasca Glacier.

When we saw the number of tourist buses in the car park our hearts sank a little until we realised that there was a hike we could do out to the glacier and there seemed to be very few people taking this option. We are pleased that we did choose to hike because if we hadn’t we wouldn’t have met William and the diminutive Monique.

William came to speak to us in the car park as he was preparing to set off on what we thought was a short hike like us. He needed a pair of pliers and fortunately we were able to assist.

It turned out that they were about to ski cross country style out over the glacier in order to climb Mount Columbia before returning three days later. I expressed my concern at the duration of their trip particularly knowing how the weather can change so quickly and can be so cold but this was when the ‘petite Monique’ told me that she had summited Mount Everest and had solo climbed Mount Logan in the Yukon (I didn’t think now was an appropriate time to tell her that I had been to the top of Ben Nevis). I was amazed at the achievements of this young lady and slightly awe stuck at their adventurous nature.

What surprised us even more was when they expressed their interest in our trip and our vehicle and how jealous they were of what we were doing. They said it was their dream to do something similar at some point and I have no doubt they will. We said our goodbyes and went off in different directions.

On the return to the car park Chrissie was behind me when she suddenly fell to the snow. I was just about to put all my first aid training into practice when she shouted out “Look I’m a snow angel”. Bloody woman, scared me half to death!

After a wonderful morning at the glacier we continued on towards Jasper passing Tangle Creek waterfall….

and then nearer to Jasper we passed the Athabasca Falls

Arriving in Jasper we felt a small bit of luxury was called for and booked ourselves in for three nights at the Fairmont Jasper Park Lodge.

Over the last few days the weather has been good, a small bit of snow on each day, but nothing that has stopped us from going on some local hikes including The Valley of the Five Lakes and Maligne Canyon

We set off tomorrow towards Prince Rupert and the ferry that we are due to catch on 7th May at 3 a.m.!!

First time trying to capture an image of the Milky Way
It’s not just the birds that fly down here!
Enjoying self isolation!
We are loving the cactus deserts here in Baja California
Went to see the grey whales on the Pacific coast. Even got to see a ‘RainBlow’.
Beautiful sunrises and sunsets nearly everyday.
Stingray, Stingray!
Just a small sample of the beautiful birds in Baja California
Spent an afternoon watching Ospreys fishing and feeding.
Wile E Coyote and Roadrunner.