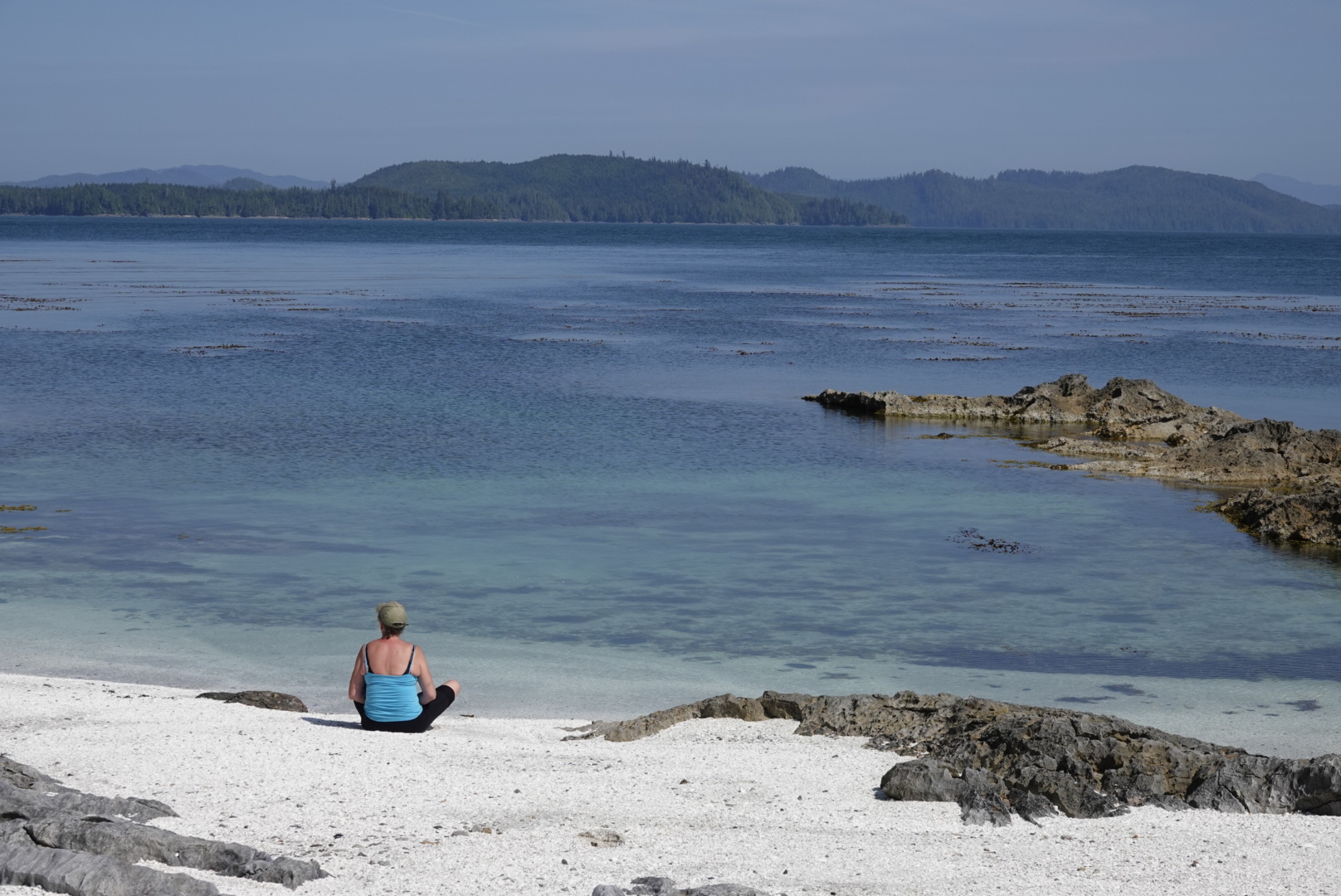 We had originally planned to leave the Prince of Wales Island at the end of July but a strike by the union that operates the Alaska Marine Highway ferry system put paid to that.

With no road system in or out of Ketchikan the only way to travel to/from is by boat or plane. As we would struggle to load the Land Rover on a plane we were dependent on the ferry to take us from Ketchikan to the start of the next leg of our journey at Skagway, Alaska. With only two ferries a week we had to wait until the strike finished and then make a booking. The strike lasted a total of 10 days.

The ferry from the Prince of Wales Island to Ketchikan was in operation throughout this period, however, but we much preferred to wait on the Island. We had made so many new friends that the delay to our planned departure date was a most enjoyable one.

Whilst we were pleased to receive the news some days later that the strike was over and the ferry service had resumed we were equally disappointed that our time on the Prince of Wales was coming to an end.

I am writing this blog post on the ferry, and Skagway is only four hours away, yet our hearts and minds are still very much on the Prince of Wales Island.

The majority of our time on the Island was spent on the water, either on the float house or on a boat, however, we did make a number of road trips around the Island visiting some of the small towns and exploring old logging tracks. These short breaks on land gave us an opportunity to camp out overnight in the Land Rover and give all our new equipment a test.

Our first week-end away from the float house saw us drive to Coffman Cove, a small town on the opposite side of the Island.

We had been told there was a shack there that served good hamburgers and having lived on mainly fish and seafood for several weeks this sounded most appealing.

After consuming delicious burgers and with full bellies we headed further north along the coast and turned inland up an old logging track that appeared on the map to climb to the top of a small mountain where we hoped to get some good views.

We didn’t get the views we wanted, there were too many trees in the way, however, we did find an old quarry, originally used by the loggers to make the logging roads, and this became our home for the night

This was our first night out on the Island alone, and with stories of black bears supposedly loving the taste of non-residents, we were on full alert as the darkness crept in on us and the fire dwindled down.

After a couple of hours we had eaten dinner and we sat out listening for wolves. With no wolves to be heard, or bears to be seen, we eventually turned in and surprisingly both had a good night’s sleep.

Probably the favourite trips we made were to the north of the Island. We had been made aware of a small camping cabin, located in the forest adjacent to a place called Memorial Beach, which could be reached down an old logging track. Although we had no need to stay in the cabin we did spend a good amount of time at Memorial Beach exploring and enjoying the wonderful views.

The weather on the weekend that we went to Memorial Beach was sunny, dry and hot and we were treated to the same weather again the next trip we took as we travelled northwards to Ratz Harbour.

Ratz Harbour is located on the Island’s north east coast and we had to pass through a small town called Thorne Bay on the way. It was here that we would stock up on food and groceries for the week-end.

With enough supplies to last a few days away we turned on the fridge in the Land Rover for the first time since leaving the UK. It didn’t work!

In the supermarket car park, on a gloriously hot day, Paul spent nearly an hour trying to locate the problem. He didn’t manage to, but a friendly local suggested we may wish to visit Tracy who owned a workshop only a mile or two away.

With many exciting images in his mind of a young lady in dungarees bending over his Land Rover Paul packed up his tools and raced to the outskirts of the town to find Tracy.

Any disappointment Paul may have had not to find a Daisy Duke type working on his Land Rover was quickly put behind him as Tracy located and fixed the problem in short order – a loose wiring connection.

With fridge running properly it was only an hour or so of driving before we were parked on the shore of Ratz Harbour where we camped for the next two nights.

Our two days by the edge of the harbour were lazy ones enjoying the weather, the scenery, the sunsets and the wildlife. We saw killer whales in the distance and a cheeky mink close up. Shorts and T shirts were the order of the day.

Returning home from Ratz Harbour we took a side turning onto a forest track which, according to our map, promised possible views from a high vantage point. We weren’t disappointed and enjoyed looking at the view while having a leisurely lunch. Salmonberries picked along the way provided a nice dessert.

We were surprised, however, to find along the track to the viewpoint a hidden treasure called Salt Chuck Mine. An interpretive walking trail provided information on the mine’s history, the people that lived and worked there and of its eventual demise. A most enjoyable couple of hours was spent following the trail through the forest and down to the Salt Chuck (where the sea meets with the river) where much of the original mining plant and equipment still remains.

The adventure, however, that will be remembered by us as the most special was the visit that we made to a small remote island located just off Eagle Island. To get there Jerry transported us, and our canoe, by boat to a point just off the island where we could canoe ashore. The operation of climbing out of the boat and into a canoe in the middle of the ocean was a rather delicate one, and one which Chrissie had fretted over for a number of days beforehand, but I’m pleased to confirm all went well.

Jerry, satisfied that we were under way safely, left us to go fishing for salmon and within a few minutes we were pulling the canoe onto the small beach which would be our home for the next couple of days. The weather and location were simply stunning.

We couldn’t believe we were in Alaska. If we didn’t know better we would have sworn we were in some tropical paradise. We were the only people for miles around (apart from the odd passing fishing boat) and with no bears to worry about we could camp in peace on the beach. The stars at night were some of the best we have ever seen.

Other ‘mini’ adventures included a trip by boat to Tuxekan, an uninhabited island, where loggers are currently logging the island and transporting the fallen trees to the rest of the world by large barges. Paul was very excited when he was offered the opportunity to operate one of the large machines that sorted and piled the logs in preparation for bundling.

When more mundane tasks such as shopping had to be done it was to either Craig or Klawock that we travelled. On one such trip we were lucky enough to be invited to watch the master carver, Jonathan Rowan, creating his latest Totem Pole. Jonathan, a Tlinglit native has created a number of Totem Poles and many of them can be seen in Klawock Totem Park

Totem poles are used to tell stories and pass on messages and some are used in burial grounds, as shown below. These ancient totem poles were located on an uninhabited island close to where we were living.

We leave the Prince of Wales Island after a stay of just over three months having made new friends and many wonderful memories.

We were constantly in awe at the abundance and variety of wildlife and we were regularly treated to outstanding sightings both on land and in the ocean. We had hummingbirds around our cabin, even perching on the top of our fishing rods.

On land we saw deer with new born fawns

We saw sunrises, sunsets and rainbows

We had many laughs – including listening to true stories of a diver that couldn’t swim and chuckling at the Naukati Bay Fire Brigade. The only place we are aware of that has three fire engines and none of them work!

But it will be of Jerry and his dog Boy that we will leave with the strongest memories.

We have spent hours in a boat with Jerry, mainly fishing, but also just cruising and enjoying the beauty of South East Alaska. He was a wonderful host and we will miss being with him. A special man living in a special place.

Thanks for everything Jerry.

p.s. Not every memory we have of the Prince of Wales Island is a good one – the fish strike back!!

Is a whale or a shark?
Just off home for a fish supper!
First time trying to capture an image of the Milky Way
It’s not just the birds that fly down here!
Enjoying self isolation!
We are loving the cactus deserts here in Baja California
Went to see the grey whales on the Pacific coast. Even got to see a ‘RainBlow’.
Beautiful sunrises and sunsets nearly everyday.
Stingray, Stingray!
Just a small sample of the beautiful birds in Baja California